In Memory: John Lyon – It is with deep regret that Keystone Opportunity Center announces the death of Board Member and long time volunteer, John Lyon, on December 9, 2020.

John Lyon was one of Keystone’s longest serving volunteers. Serving in the insurance industry, John joined the Board of Directors in the 1990s. When the Indian Valley Opportunity Center (IVOC, founded in 1970) and the Indian Valley Housing Corporation (IVHC founded in 1990) merged in 2009, John Lyon stayed on the Board of the newly merged Keystone Opportunity Center. After the passing of former Executive Director E. Richard Aichele III, John Lyon stepped into the position of Interim Executive Director. Afterwards, John played a role as a volunteer staff person, coming to the office regularly to assist with administrative work.

In addition to his work on the Board of Directors, John regularly assisted as a Community Ambassador, informing the community of the incredible work of Keystone Opportunity Center. John will forever be missed by many in the community.

The entire Keystone organization extends it sympathy to his family and many friends.

Contributions to Keystone Opportunity Center may be made in John’s memory online by clicking here.

Some tributes from the Keystone community:

Chris Farley, Affordable Housing Manager & Mobile Pantry Coordinator
John Lyon was a mentor and a great friend to me over the last couple of years. John was always there to help with any problems or to talk about anything. John made his rounds at least once a day when he was at the office and always made time for everyone. Whether employees, volunteers or clients, he would always check in to see how you were doing, he always gave you his time and that says a lot about the kind of man John was. John could have done anything in his later years and he devoted so much of his time to Keystone and to the community. John had a great sense of humor and he could always lighten the mood, which was very much appreciated considering some of the challenges we face at Keystone. The quality of John’s character is hard to match. The ease in his interactions, his gracious manner, his friendliness, his humor, his intelligence, his patience, his caring spirit, his wise words and his leadership. These are all things that I admired about John Lyon. I will miss you John. I am blessed to have known you as a friend and colleague and I am a better man because of you.

Janet McBride, Adult Education Student Support Coordinator
It’s always a shock and sad to hear of a friend’s passing. John was engaging, caring, interested in the well-being of others, always ready to help. Thinking of him brings a smile as I recall him passing through the Education department, stopping at my desk to chat about all sorts of things over the years…trips, grandchildren, cancer battles, as well as genuinely inquiring about how the Ed programs were going. He was a delightful person. I’m thankful our paths crossed. Praying God’s comfort for his family. 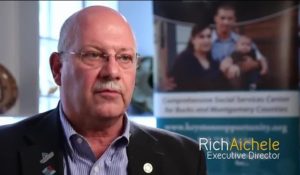 After a long career in finance, Rich joined Keystone as Executive Director on January 1, 2010. He retired January 1, 2017.  He approached this position as he did life in general: with great energy and devotion to the cause.  He brought many changes to our organization which helped us advance Keystone’s mission. 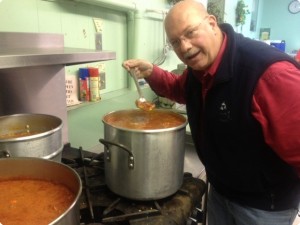 Rich was a true asset to our community through his service at Keystone, and as a member of the Rotary Club.  He always gave back and helped those who were less fortunate.  He did an excellent job of representing our organization through membership on boards of directors and on committees in both Montgomery and Bucks Counties.

The entire Keystone organization extends it sympathy to his family and many friends.

Contributions to Keystone Opportunity Center may be made in Rich’s memory online by clicking here.

Keystone is offering classes in Souderton, Lansdale, Hatfield and Norristown as well as remote classes via Zoom.

Food Pantry
Keystone’s food pantry clients can pick up their groceries in the parking lot of Keystone Opportunity Center on:
Tuesdays, Wednesdays and Thursdays from 10:00 am to 2:00 pm
1st Thursday of the month from 4 pm to 6 pm

If you are a new client to our pantry, we ask that you bring proof of residency showing that you live in Souderton School District.

Food Donations accepted Mondays through Thursdays from 9:00 am to 4:00 pm at our Food Pantry entrance of Keystone.

Fresh For All
Fresh For All is open every Tuesday from 12:00 pm to 1:00 pm. To reduce the risk of spreading the virus, clients will drive up for a contactless pickup.

Keystone’s Spanish-Speaking Community Assistance Coordinator is available on Tuesday, Wednesday and Thursday from 10:00 am to 2:00 pm.

Housing
If you are in need of housing, please email us.

Keystone Tenants
To assist neighbors in our affordable housing units, we have the option to pay rent online by clicking here.

Administrative Offices
Keystone’s administrative office is open every Tuesday, Wednesday and Thursday from 9:00 am to 2:00 pm. All other times, people can access recorded information and leave messages for staff.